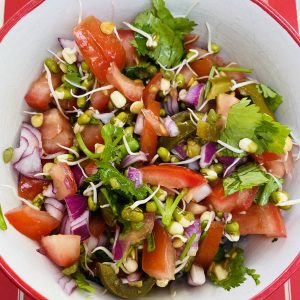 TOP TIP: Mung Bean sprouts: Sprouting is very common in many Indian households as it improves bioavailability and helps with digestion’s of beans and seeds. You can buy sprouts from a health food shop or sprout your own, really easy (rinse, then soak 1 cup dried mung beans overnight in water, drain. If you don’t have a sprouter, keep moist in a covered bowl in a dark warm place (eg airing cupboard) usually for 24 -48 hours , until you see the sprouts appearing. These sprouts are a power house of vitamins, protein and fibre). Rinse throughly before eating due to risk of bacterial contamination, if not careful. Enjoy the rest of the mung bean sprouts as a snack with some soaked almonds and squeeze of lemon or in a soup or just on their own.
Keyword Plant-based, Salad, Vegan
Previous articleTurmeric Tofu Scramble